The Dancing Boys of Afghanistan 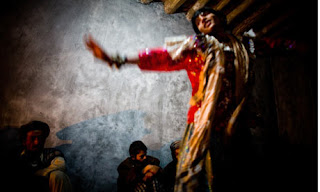 I know no one reads this blog, but if you happen to be in the UK tomorrow night with access to a TV, you could do as I plan to and watch a repeat screening of The Dancing Boys of Afghanistan on More 4:

"The Dancing Boys of Afghanistan reveals a dark side of Afghan culture which has up to now remained hidden. A tradition known as Bacha Bazi (literally 'boy play'), which was banned by the Taliban, is spreading through the country and exploiting the desperation of many poverty stricken children."

If you can't watch the doco, Reuters carries a story about the "bacha bereesh" (boys without beards), as does the dear old Guardian (where would I be without them?) -- though their take is, if anything, much bleaker.

Update: Wikileaks cables have now shown that foreign contractors working in Afghanistan were implicated in Bacha Bazi. Interior Minister Hanif Atmar was worried enough to approach the US and ask that the story be 'quashed' in case deaths followed the revelations.