Come on if you think you're lard enough: a dance-off in three parts

I used to write a column for Wellington freebie Capital Times, so even though I'm now miles away I check in on the website from time to time to see what's shaking. In the last wee while it's been me, shaking with anger.
Before giving the background to this rather lengthy screed,* let me put my cards on the table here:
First, I think that if you get up on a stage and charge people actual money to watch whatever it is you're going to do then you have to take your lumps. That is, it achieves nothing to get involved in a public slanging match with a reviewer who, let's be honest, (a) saw your show for free and (b) obviously didn't give a fat rat's arse about whether or not you liked what they had to say. If they cared, they wouldn't have put it out in the world for everyone, including you, to read. Responding to reviews, as a rule, is also not very dignified.
In the second place, I have no real love for The Real Hot Bitches.
They describe themselves as a "NZ dancing phenomenon which is dedicated to real hot dancing, lycra, neon, raunch appeal and attitude". They're a bunch of people who have little shame and dance experience that extends no further than their living rooms/bedrooms. This is all fine and as a shtick it has legs (pardon the pun), because they now have a branch in Melbourne. If you can bear it, here are the original flava Real Hot Bitches in action:
Since this was filmed, the Real Hot Bitches (or "RoHoBos" for short) have developed into a 'proper' troupe who perform in proper venues and get reviewed by proper critics, ie not just the mouth-breathers who populate the comments sections on YouTube. And the RoHoBo-in-Chief is not pleased by this last part at all. Mainly because, as we'll see, sometimes even 'proper critics' can be a bit like the mouth-breathers who populate the comments sections on YouTube.


On 11 August, Capital Times published Wellington dance doyenne Deirdre Tarrant's review of the RoHoBo's latest show, The Fierceness. From the opening sentence, it was apparent that Tarrant was going to bring the fierce to The Fierceness:

This was so appalling it was actually appealing.

Nor was Tarrant prepared to concede that the RoHoBos had managed to get themselves booked into Downstage Theatre (one of Wellington's most venerable venues) because they have objective fans. Exhibit B:


A partisan audience greeted friends in the cast by name with cat calls and encouragement.

Translation: It was like going to a school play where the audience was populated with indulgent parents and grandparents. And then Tarrant really puts the steel-capped pointe shoe in:

Onstage The Real Hot Bitches (27 including three men who were arguably the better movers and certainly in better trim than most of the ladies) grind their way through repetitive routines in search of the dream to be “semi-professional”.

Since you've sketched a quick but evocative portrait of the 'ladies', what, pray tell, did these three men actually look like, Deirdre? It's one thing to criticise the dance – after all, that's what you're there to do – but to critique the bodies? Particularly when you know you're not off to see professionals? Low blow. And now the 'ladies' are presumably eyeing each other up and wondering who was excluded by the qualifier 'most of'.
But Tarrant isn't done. In her view, the lack of professionalism continues beyond the confines of the stage:

Casting is under the fierce eye of Cynthia Sachet (I was the hottest dancer alive, then…?). Loud music (not credited), loud costumes, loud voices and a script inspired by Chorus Line that was, of course, not clever nor [sic] catchy but had appal/appeal.

Gotta agree with you there, Deirdre. Not crediting the music? Uncool. Still, Deirdre didn't think it was all bad:

But there was a script, a structure, clear direction by Gabe McDonnell and Rosie Roberts and a context as six of the dancers were recalled to go through their audition paces.

So, in summary Deirdre, what did you think?

Imagination was not required. Provocative and gyrating in their gladiatorial g-strings, this troupe is enough to put you off dancing.

'Enough to put you off dancing'? Damn, girl, that's cold.
But just when you think that La Tarrant has no more left in the tank, that she has truly knee-capped the RoHoBos once and for all, she breathes deeply, resets her shoulder blades down and back, and launches herself into her final grande jeté:

Not for the fainthearted but definitely a sequinned step up in tinselled tackiness from the last RHB show I saw. Cynthia had the final say: “you’ll not make friends in this business – not if you’re any good”. The Real Hot Bitches certainly have friends. Downstage has opened its artistic arms to a new genre.

Heavens to Murgatroyd, Betsy. There is no way that a troupe called The Real Hot Bitches, built on 'raunch appeal and attitude', creators of a show called The Fierceness, is going to munch that shit sandwich and say 'yummy', is there? You bet your sweatbands it's not.


Part two
Where most performers would recognise the futility of taking the fight to the pages of the very publication that saw fit to print such a scathing review in the first place, the RoHoBo-in-Chief fixes herself a nice big tumbler of gin n' hurt feelings and hits 'send' on her email machine. On the letters page of 18 August, Capital Times allowed Cynthia Sachet her right of reply, and it was pretty obvious which part of Tarrant's review had really got Cynthia's dander up:

Darling you missed the point [Ugly unitard appeal, Capital Times, Aug 11]. I know sometimes it is hard to “think outside the square” and imagine a world where people with a few extra pounds on their chops are allowed to dance on a stage. Sweetheart, don’t worry we are not a threat to you and your wonderful svelte graceful gals, we have a sense of humour, a love of color and of course lunch. Yes, we had a story line and I know that contemporary dance is all about being a wee bit obscure and earnest so that would have thrown you. Chin up old girl, you are still dance royalty.

As stated, I don't think it's wise to respond to reviews. But in this instance I think Cynthia's right because:
And that, you think, is that. But you are oh so very wrong.

I loved your letter [Write On, Hot bitch appeal, Aug 18]. Go the fierceness. I am so honoured – I actually think I am pretty “outside the square” most of the time, certainly on the edge of it. I enjoyed the evening but point taken and I will work on developing my regal horizons. Yes, I guess I am surrounded by wonderful dancers who work hard and have that svelte image but dance is always about the heart. Keep up the love and the looks ladies, and the sense of sardonic [sic] and I will do my bit to deserve the regal status you so generously endow. I suspect we are actually both on the same page at heart – fiercely passionate about dancing.

Oh, dear. This delectably snobbish and vinegar-laden response makes Deirdre seem like the embodiment of the ruthless, competitive and rage-fueled stage pony depicted to such hilarious effect in Showgirls. If she did 'enjoy the evening', perhaps she could have said that instead of describing the troupe as being 'enough to put you off dancing'. Maybe, in spite of the body fascism hinted at in her review, this smackdown could have been avoided. Cynthia could have had the last word, been thought a soft-skinned luvvie by some and a heroine by others, and that would have been that.


But alas, unable to see past the physiques of the RoHoBos, Tarrant decided that if an insult was worth hurling once it was worth plating in lead and hurling again: 'Yes, I guess I am surrounded by wonderful dancers who work hard and have that svelte image but dance is always about the heart.'
In a nutshell, that comment is why I have spent literally minutes of my life posting about this tawdry exchange. Oriental dance is one of the many forms of dance you can work really hard at, for many years, and perform to an exceptionally high standard – and yet still you may never look like this: 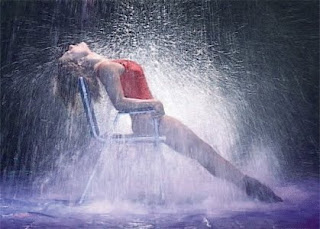 Okay, Deirdre? Don't make me perform the Angry Dance made so famous by your son, Bret McKenzie.** Let's finish on a light note. Take it away, Bret:
*Lengthy by my standards.
**He really is Deirdre's son.
Posted by Ramona at 21:50