A trip to Scotland

Weeks ago, I was in Edinburgh at the tail end of the Festival. Among the many cultural treats on offer was a jaunt to Hilary's Bazaar, where I bought this beautiful Baladi Scimitar:

Now all I have to do is learn how to dance with damn thing.

As a side note, there are rumblings that next year the Festival organisers are going to attempt the unenviable and seemingly impossible task of regulating the reviews that get posted as the event goes on. It is remarkable, as you wander the beautiful streets of Edinburgh, just how many shows have received five-star reviews and it's tricky - if you've gone with an open mind and a full wallet - to choose just what you'll go to.

Fortunately, some citizen critics have taken to those same streets to help you decide. Behold: 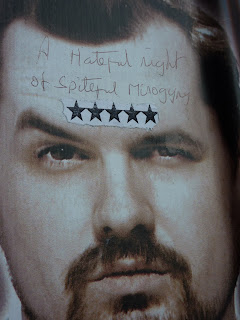 If you can't read the scrawl, it says "A hateful night of spiteful misogyny." This same guerrilla reviewer had been busy down Cowgate, where the same poster was emblazoned with the legend "Not funny. Don't go."

His show was called something really lame like Alcoholopocalypse. Sadly, the identity of this polarizing 'comedian' is lost to me in the mists of time, but if it helps I can narrow it down: I'm sure it's not Omid Djalili, Shazia Mirza, Jennifer Coolidge or Reginald D Hunter.

UPDATE 24/10/10: I have just remembered the name of his show was actually worse (and more offensive): "Alcoholocaust". Through the power of Googling that name I can tell you that he's an Aussie called Jim Jefferies. Frankly, if you willingly go off to a show called "Alcoholocaust" and then are not amused by the content, you should congratulate yourself on not being nearly as terrible a person as you thought you were.
Posted by Ramona at 22:05