"My Own Private Belly Dancer" is a comedy about a fungus scientist, Jeremy, who is leading a rather dull and colorless life. He is in love with his co-worker, Angie, but wouldn't dare tell her. One day, a magical belly dancer appears. Though no one else can see her, Jeremy's new invisible friend forces him to live life to the fullest.


Here's a still from the film, in which the invisible belly dancer points out to Jeremy that, thanks to the reflection from his super-shiny worktop, she can see he's trying to look down the front of her bra*: 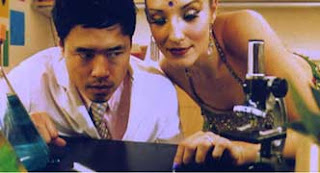 *My hypothesis: may not actually be what's going on at all.


Not to be a curmudgeon or anything, but what's the point of a dancer no one can see?
Posted by Ramona at 18:23