UPDATE 15/02/11: This just in from the Guardian (10.30am): “Italian judge orders Silvio Berlusconi to stand trial on charges he paid for sex with a 17-year-old girl and then tried to cover it up. More details soon ...” 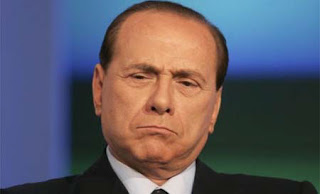 Yes, it seems that Ruby Rubacuori (or, as her parents know her, Karima El-Mahroug) may be the nail in the coffin of all of Signore Berlusconi's uh ... nailing. Although Ruby is frequently referred to as a belly dancer, a quick search of Google images (which you shouldn't do at work, take my word for it) will reveal that Ruby is, well, quite a different kind of entertainer. I've never seen so many pixelated images in one place.


What hasn't been clearly explained in most news outlets is that while the age of consent in Italy is 14, it is illegal to involve those under 18 in prostitution or pornography. Since Ruby was only 17 when she says Silvio gave her €7,000 and jewelery as a 'thanks for coming to my bunga bunga party!' gift, there are now good grounds for assuming that he may have broken the law.
So while Ruby may have served to lower belly dancers everywhere in the estimation of the general public, at least she may be helping to rid Italy of a deeply unpopular leader. Good work, modern-day Judith!
UPDATE 23/01/11: The Independent is now referring to the women caught up in Berlusconi's Bunga Bunga of Shame as a "harem". They are emphatically not a harem. I don't know what the collective noun is for sex workers (I suppose what you'd call them would depend on your personal view of sex work), but it's not "harem". Look it up in the dictionary, guys.
UPDATE (12/02/2011): Muslimah Media Watch poses a rather different question about Ruby's identity: instead of whether or not she's a belly dancer, they ask 'But is she a Muslim?' On one thing, though, everyone can agree: she's not Hosni Mubarak's granddaughter.

UPDATE (14/02/2011): As new research shows that Italy has a gender gap worse than Kazakhstan's, the women of Italy (and many supportive men) have taken to the streets to protest. In particular, they are fed up with Berlusconi's treatment of women and what it says about the position of women in Italian society.

"Organisers say the 74-year-old premier's antediluvian attitude to women has been made clearer than ever by the allegation that he paid for sex with a 17-year-old Moroccan belly dancer, Karima "Ruby" el-Mahroug.
"The Ruby case has revealed a system of political selection based on an exchange of sex and power," said Iaia Caputo of the organising committee of the protests. "We want to send a message to the country and to the parties that do not see themselves a part of what has happened over the last few weeks – it's possible to change route."

My favourite placard at a demonstration said (in English), "Make love - not bunga bunga".

*EDIT (31/03/11): No one has said anything to me about this, but I would like to point out that I know Mr Berlusconi is the Prime Minister, not the President, of Italy. (The Italian President is Giorgio Napolitano.) No offence is meant to the people of Italy or Mr Napolitano, who does not get on very well with Mr Berlusconi and therefore has, it is presumed, never been invited to 'bunga bunga' party. However, as a blog title 'Bunga bunga, indeed, Mr Prime Minister' just didn't sound quite as good as 'Bunga bunga, indeed, Mr President' - even if it isn't accurate. In any case, you could read it as being said to the President by someone telling him about Mr Berlusconi's misbehaviour. Or something. Look, I just wanted to clear that up.
Posted by Ramona at 23:18