Snakes on a stage

Although I love (LOVE) Blade Runner I would never perform with a snake. Call me an old flake, but I think it's unfair to the animal - nevermind the risk that your snake will vomit a partially digested rat all over you and your expensive costume.

I don't doubt that Serpentessa here (the self-proclaimed 21st century 'snake priestess') is sincere about the spiritual dimension of her work, but that doesn't stop me from finding it cheesy and kinda boring to watch:

What exactly do the snakes add here? If anything, as Serpentessa says, they look like a hindrance.

Despite her cautions about bearing in mind 'the culture of your audience', let's face it: women dancing with snakes can't help but conjure up a dimension of cod-exotic sexuality that belly dance can well do without. (Sample YouTube comments from around the traps: "I'm turned on"/"its kinky i like it" [sic].) More evidence of the dodgy bestialist overtones - the lovely Debra Paget in Fritz Lang's Indian Epic:

Oh, yeah, and this girl: 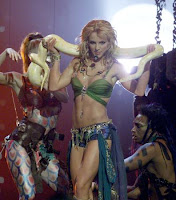 Instead of buying a snake to fling around, why not donate to the Performing Animal Welfare Sanctuary, PAWS, or the excellent, recently-hit-by-a-hurricane Belize Zoo?

If you insist on snake dancing, go for gold and be really literal about it. Check this out from 1958's The Seventh Voyage of Sinbad:

If you think this is impossible for a human, meet The Snake Girl (Nokulunga 'Lunga' Buthelezi). We belly dancers go on about snake arms and hips all the time but we've got nothing on Lunga. I first saw her on a kids' television show where the tykes voted for their favourite acts. Be warned - by the end of her performance several children were in tears:

How can you not love that dude slumped on the couch in an attitude of 'seen it all before' nearly the whole way through her act? It's true: no matter how good you are, there's not much you can do to win over a jaded audience.

17/02/2011: And mad love to satirical site The Daily Mash for backing up my concerns by using this image and this caption: