A case of mistaken identity

This week, instead of addressing an issue from one of our dancing readers, I have to defend myself from allegations of what TidalWave098 described in an email to me as 'sluttish, disgusting carry on'.


I had no idea what TidalWave098 was on about, but at first I put that down to all the ouzo I'd had the night before.
Here is an excerpt from the offending email (I have tidied up her[?] spelling and grammar a bit):
"Other belly dancing squid rely on you to provide a good example to our sisters on land and represent our community. What you have done totally undermines our good name and makes people think that the belly dancing performed in the world's oceans is only one step away from a live sex show," raved TidalWave098, before really putting the hooked tentacle in. "YOU ARE A ONE-SQUID SADIE AND KAYA ROUTINE AND I AM ASHAMED TO SHARE A SUBSPECIES WITH YOU! ASHAMED! ASHAMED!"
Shaken, I stubbed out my cigarette and stared at the screen for a long time. That was a mean thing to say about Sadie and Kaya, I thought. I'm sure they're very nice girls. Then I wondered what the Davy Jones TidalWave098 was on about -- and noticed the attachment. With trembling tentacle I opened it. What I saw shocked me to the core, I don't mind telling you. Be warned; the following image is NSFW: 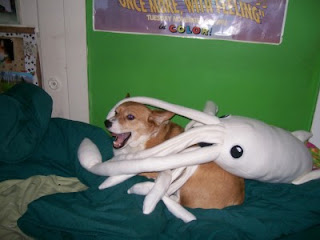 Let us get this straight, OK? That isn't me. It's true that the salty sea dog looks familiar, but it's a big ocean and the odds that this is some past paramour of mine are slim. In any event, I can assure you, gentle readers, that what you are looking at is a picture of some other squid -- not me! Are we clear about that? The only reason I am giving this distasteful image any bandwidth is because now it is on the internet the rumour that this is me, Jilly the Squid, belly dancer and agony aunt, is spreading like wildfire and a stop must be put to it. Just look at the picture of me at the top of this post. I'm obviously orange, and mad as hell.