For AGES now, 'The Mermaid' has been a work in progress. And she still is a work in very, very slow progress. At this rate, the poor wench is going to be lucky to ever make it out of the tadpole stage. Although I'm settled on choreographing for veil (for a while there it was going to be scimitar, but, eh. It's heavy, and I'm puny. Also, it isn't as hard to evoke stormy seas with a silk veil as it is with a sword), the choreography and the costume are still an elusive mystery.

The intricacies of costuming are revealed to the belly dancer piecemeal, and unfortunately most of us find out that our dangly earrings are going to get tangled in our melaya leff/our bracelets are going to snag on our skirts/the clasp on our bra is absolutely not going to withstand a barrel turn etc only once we are out there in front of an audience comprised of total strangers and, much worse, the people who know and love us. And in these days of camera phones and the internet, that audience can increase exponentially.

I think I'm pretty sussed on what will and won't work (a silk veil will not play nice with a coin bra). All I know for sure is that I don't want a 'cabaret-style' mermaid. The song is an old sea shanty about being drowned by an evil siren, so 'prettiness' is definitely out. Methinks she'll have a harder, almost piratical edge. In any event, a mermaid skirt is just too obvious. So I'm going with pants. (And for you Brits out there, I mean that in the sense of trousers, not underpants. So stop giggling.) But do I want Sinbad the Sailor harem pants, or 17th century sailor-style trousers? Y'know the ones, fitted and flared, and usually with a vertical black and white stripe? I do like the idea of implying that she's knicked her clothes off her victims, but there's something about that particular item of clothing that's niggling at me. 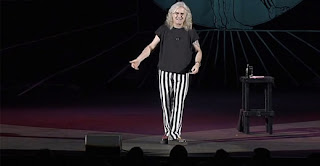 I wonder what it could be?

Email ThisBlogThis!Share to TwitterShare to FacebookShare to Pinterest
Labels: costuming