Stars of the millennium: Nabila Sabha

Nabila performed and taught at the last International Belly Dance Congress in the glamorous English town-like thingee of Frimley.* That was 2009, not long after I'd emigrated to the UK, and it was the first time I'd thrown myself into weekend-long intensive workshops. When the showcase came around all I wanted to do was sit and watch, but I was so dog-tired there was a chance I might fall asleep face-first on my plate of unappetising 'vegetarian lasagne'. Until Nabila came on stage - by the time she finished my face hurt from smiling. She caught me grinning like a loon and waggled her eyebrows at me. I thought she was just the greatest life form ever to be based on carbon.

This is a famous piece of music. I have no idea what it's called because my copy was pirated by a well-meaning teacher acquired years ago and if it had a piece of paper that identified it, well, that's long gone. Anyway, here's Nabila dancing to it:

Anyhoo, here she is again, rockin' the party with a live band:


YouTube Channel       Website
*Frimley is in no way glamorous. Though it does also host the world darts championships at the Lakeside Convention Centre, the same venue used to host the International Bellydance Congress. Just so's you know how deeply, truly, magnifique and opulent the surrounds at Lakeside are, here's a pic I took in the room where no less a figure than Fifi Abdou was hosting her workshops: 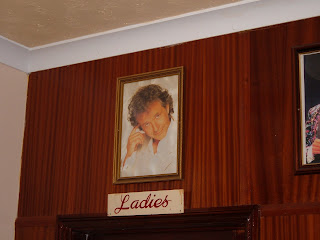 Yes, ladies. FEEL the suave-itude! (No, I don't know who he is either.)

It is, in hindsight, a bit odd that while everyone else was queuing to be snapped with Fifi, I was taking souvenir pictures of vaguely amusing portrait/toilet signage juxtapositions. There must be something wrong with me.
Posted by Ramona at 23:44