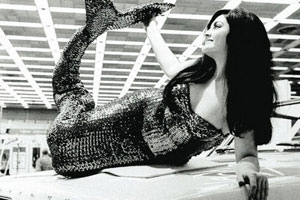 Mermaids are real! (Sort of.) And some belly dance! As part of my prep for The Mermaid (which may never be performed, but one day I'll have to start a Tumblr, at least, to make use of all the photos I've amassed), here's some stuff I've got about dancing underwater.

Not synchronised swimming; dancing. It's even on YouTube. Jilly was all like 'I told you so', but I pointed out that it's one thing to be born with the ability to filter oxygen out of water, and another to be a land-based mammal getting your boogie on sub-aquatically. To which she responded, "Pssssh..." and deliberately blew a nasty mix of ink and smoke in my face. What a squid.

In Wellington, New Zealand there's a strip club called Mermaids where nude women swim in glass-sided tanks. (On opening night, one dude was overheard asking how the women kept their hair dry underwater. True-ish story.) I'm told they even wear nasal plugs, which doesn't seem very sexy.Then again, I'm the wrong demographic for that stuff. What I'm interested in is a bit classier and a lot more skilful. 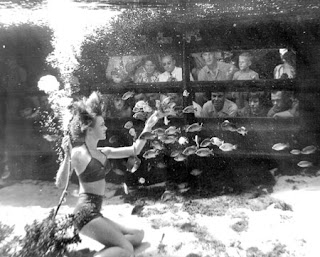 The most famous "mermaids" are those of Weeki Wachee, Florida. This pic is of Mary Darlington Fletcher, one of the first Mermaids of Weeki Wachee Springs, photographed in 1947. The financial fortunes of Weeki Wachee waxed and waned over the years, particularly once Disneyland opened, and it looked like the Mermaids might pass into legend themselves. BUT:

This is Lola Dutronic's version of Porpoise Song, as danced by MeduSirena who has a regular gig at the Sheraton Fort Lauderdale, and a completely cool website.

So. Let's give this "isolations without breathing" thingee a go:

(FYI: I've taken a deep breath and launched into rib cage circles while I type.)

Less than one minute later: