Lisa Guiraut (Leila) is best known as the dancer who catches the eye of Sean Connery's Bond in From Russia With Love (1963). She also had dance cameos in the TV show Espionage (in the episode The Weakling) (1963), starring Dennis Hopper and Patricia Neal, and in the classic 1962 film The Days of Wine and Roses.

UPDATE [23/02/12]: After months of searching, I have found a pic of Lisa in the "dancing on the yacht" scene from The Days of Wine and Roses! If anyone has a clip please let me know. 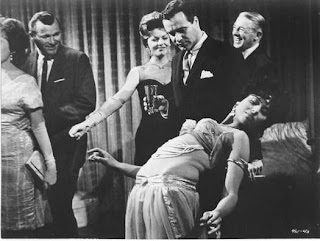 She was in a German TV mini-series in the late 1960s, had a walk-on part in a 1982 French farce about a bank clerk "given" a prostitute as a retirement gift. And then ... nothing. Not even a Wikipedia page.

EDIT (31 October 2011): Originally this post featured a clip of Lisa dancing in the 1966 Charlton Heston vehicle Khartoum. Unfortunately, it's been removed because the YouTube account holder had breached terms and conditions. Here is a still picture of Lisa in Khartoum instead: 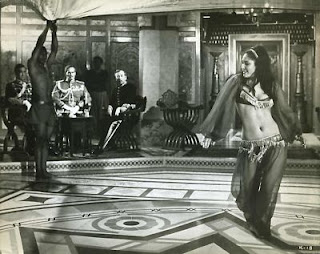 As soon as I can find another version of this clip I'll re-post it! In the meantime, you can download the whole film from this site: http://jooy.ru/node/22136

Good luck with that if you're brave enough to try it.

UPDATE 21/3/13: Many thanks to Jennifer over at the fabbo Orientalish for reminding me of the description of the real General Gordon's response to Egyptian dance in Lytton Strachey's Eminent Victorians:


"On his way up the Nile, he was received in state at Khartoum by the Egyptian Governor-General of the Sudan, his immediate official superior. The function ended in a prolonged banquet, followed by a mixed ballet of soldiers and completely naked young women, who danced in a circle, beat time with their feet, and accompanied their gestures with a curious sound of clucking. At last the Austrian Consul, overcome by the exhilaration of the scene, flung himself in a frenzy among the dancers; the Governor General, shouting with delight, seemed about to follow suit, when Gordon abruptly left the room, and the party broke up in confusion."