Geddit? "Tattuesday"? It's like running the words "tattoo" and "Tuesday" together, because it's Tuesday and I'm posting pictures of tattoos!

There's a blog called Tattoosday? That's quite similar to my joke, innit? Damn. Oh, well - the old anarchist maxim that "nothing is original" claims another victim.

I went looking for belly dance tattoos. Lots of dancers have 'em, but I wondered if anyone had tattoos of dancers. Guess what?

From JudgesJudy.blogspot we have this spineless lady, who is seemingly made of Play-Doh and in the process of being Raptured. We can only assume that parts of her legs are already bound for the big hafla in the sky. JudgesJudy no longer exists - probably because its writer kept losing perspective. Ba-DOM-Dish.


From Heather Shaun's blog we have this linear representation by Florencia Nisrine. It's a reasonable guess that Florencia was not responsible for that moon/star combo. Oddly, the heathershaun.blogspot is also defunct, probably because of all the FEMALE NUDITY. 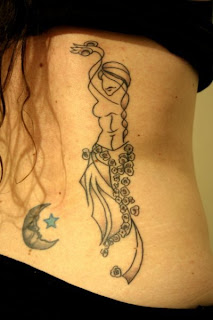 ﻿
Last of all in our list of inky lovelies is this accomplished effort:
I asked Jilly if she "had some ink." That was the wrong question to ask a squid, but Jilly really is quite the pin-up. Who would ever have guessed?