I attach a photo of all my ebay purchases within the last month. This is pretty much the source of my problem: I am running out of space and money.
Nevermind all the pricey costumes I’ve amassed: when you factor in the cost of workshops, weekly classes, summer schools, CDs, iTunes downloads, instructional and performance DVDs, swords, Isis wings, zagat, shoes and Pedralta sandals, drums, jewellery, a belly-dance themed cruise I’m taking on the Mediterranean with Nesma and Ozgen, tambourines, a decent camera with video capability, knee pads (so important for floor work and handy for doing the gardening), canes, shamadans, stage make up, Sai'idi dresses, photo shoots, khaleegi gowns, hair pieces and wigs, cover-ups, books about belly dance and the Middle East, galabeyas, tickets to haflas and shows, a subscription to Mosaic, fake flowers, extra fringing, assuit shawls, practice wear, tassels, Bellydance Superstars merchandise, melaya leffs and veils, I reckon that since I took up belly dancing about 18 months ago I’ve spent roughly £2.7 million on my hobby.

So far I have funded this by selling (among other things) my house and one of my kidneys. I have moved into my car to save money on bills and rent. My husband left me and took the dog, and I was secretly relieved because there wasn’t room for them and my collection of Bella costumes in the back of the Toyota. Also, I recently acquired a sewing machine and a large amount of sari fabric and bags of beading and appliqué, so I needed the front seat (where the dog used to sleep) for storage. The other plus is that there wasn’t enough money left at the end of each month to feed all three of us, and while I’m happy with a bag of popcorn every second day my husband’s whining about his rapid weight loss and cramped legs was getting on my nerves.
There are a few other bits and pieces I’d like to get too, and I’d like to live in a proper building again so I can show off my huge collection of vintage Fifi Abdou movie posters. Unfortunately this won’t happen any time soon – I recently lost my job because I have sold all my ‘regular’ clothes to make more room for my dance kit. As a result, all I have to wear are melaya dresses, harem pants, 25-yard skirts, kick-flared tribal trousers and cabaret costumes, but my boss took me aside and said I no longer project “the right image for a funeral parlour” and that he would have to let me go.
Now that I’m single, unemployed, homeless and my dog has left me, what do you think I should do? Start performing professionally to make a living, or enter a Texas Hold’em tournament in hopes of winning enough money to buy a trailer to store all my stuff in? My only concern is that after only 18 months I’m not really good enough for ‘the circuit’. Since I’m taking up burlesque classes soon, ideally I’d like enough money to buy a house I can install a dance studio in, but I realise I need to be realistic.


PS – how much do you think a large albino python would cost, and where would I get one?
Dear Suzy
I am not a doctor, but it seems obvious to me that you are suffering from sequinosis fabulosa (colloquially known as ‘the shines’), a common but serious ailment that afflicts roughly 99.999% of all belly dancers, ballroom dancers, figure skaters, burlesque artistes, showgirls and drag queens. For reasons that no one quite understands, it also tends to be fairly common among Australian women over the age of 50, though they are the only group outside of the performing arts known to be affected.

There is a milder, but similar, illness called glitteritis splendidiosa (‘the sparkles’). In its early stages, the shines is often misdiagnosed as the sparkles and this is why sufferers quite often develop a chronic form of the disease, despite the fact that it can be treated if caught early. The differences between the two are few but significant, and I’d like to take a moment to reproduce this section from Common Complaints and Ailments of the Eccentric (pp 1305 - 1306) for the benefit of other readers:


The Shines
The Sparkles


You can see where the two maladies overlap. But Suzy, as surely as my mass is more comfortable when well submerged, you have a full-blown case of stage 4 shines. It's bad, and you may be beyond help. I note with concern the joy you seem to take in listing your acquisitions, and the fact that you think your 'real' problem is that you don't have the space or funds to indulge your obsession even though you have lost everything. I am therefore going to get a proper shrink to get in touch with you privately, and publish this only as a warning to others to be on their guard for the early warning signs in themselves.


But for Poseidon's sake, DO NOT take up burlesque classes (you have no room for corsets, tiny hats and feather boas at this point in time) and DO NOT get an animal. This poor beast belonged to a dancer in Omaha who had developed full-blown shines with aggravating Egyptophrenia*: 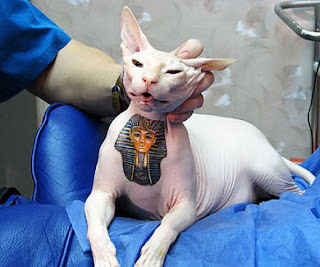 I wish you luck with your recovery.