Hello, my name is The Raqasa and I'm not 'into' burlesque {dodges all the rotten fruit and coins being hurled at her}. It's not like I don't know that I'm missing the zeitgeist by not having even a passing interest.
Because it's not something I know a lot about – beyond the fact that it's come a long way from its roots in the bawdy, political and social satire of the musical hall – I even went to see Miss Polly Rae and the Hurly Burly Girls in the West End, to see if maybe I just hadn't seen the 'right' kind of burlesque to spank my plank yet. The answer, sadly, was No. They were beautiful women, very talented dancers and they put on a slick show, but I still walked out feeling a bit ripped off. (Though it was cool to see a live version of Siouxsie & The Banshee's Peek-a-Boo, even though as a choice of song it was a bit ... obvious. As burlesque tends to be.)
As you may know if you've been here before, you will be aware that I do like vintage pin-up girls and cheesy dance routines from old movies and TV shows. And who would blame me when that Bettie Page was so gosh darned purdy? At the risk of turning this into some sort of hideously embarrassing 'Post Secret'-type thing, I gotta tell ya that I once made a cover for a mix CD of my Arabic dance music that used this picture: 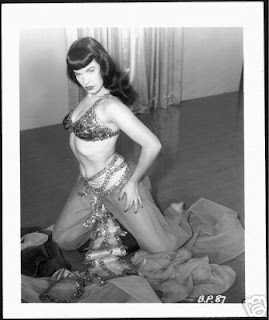 Calm down, everyone. This was YEARS ago (a CD! When now it would be a playlist!) and I now know that this image sends totally the wrong message about Oriental dance. Still have the CD with this cover, though. {smirk}
Seeing as how you've had a chance to straighten your tassels after that shocking revelation, I'd now like to share with you a clip of Bettie doing an endearingly lousy approximation of 'harem dancing' in the outfit pictured above. Now don't you worry, she's going to keep her costume on right until the end:
Granted, our girl here can't dance for nuts and if I saw this routine at a hafla I would totes be among the first giving her a good-ole dose of stink-eye. This is the kind of stuff that novices do on pub dancefloors at one in the morning when that stupid Akon song comes on, and is no more 'belly dancing' than is what goes on with Princess Kashmir at the Maison Derriere in The Simpsons episode 'Homer's Night Out': 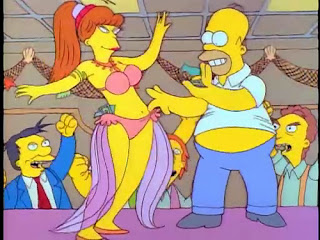 But I'm right about Bettie's costume being really cool, aren't I? Aren't I?
Posted by Ramona at 11:39