Don't believe everything you read

Hoohoohoo boy. Have I got a special treat for you today.

All of us, even if only occasional class attendees, will be aware to a greater or lesser degree that this dance form provokes some odd reactions and unearths some weird assumptions and prejudices. When I was attending RAKS in Belgium, my room-mate in the hostel was a Georgian woman studying for her MBA. "So I think this is a dance you use for exciting your husband, right?" she purred while giving me a laughingly flirty look. "If only it were that simple, I wouldn't have wasted my time and money coming here!" I laughed back. But really, I was bothered. She's 24 years old. Dancers have been working on changing that perception FOR DECADES. How many more years is it going to take before we leave all this Sonny Lester stuff behind?: 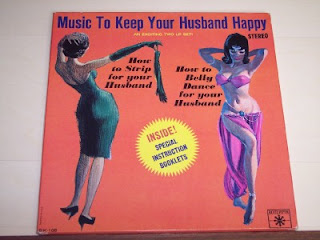 Had I known about it at the time, I would have been able to tell Anna that there's even a Facebook support group for men married to dancers: that's how delightfully mundane being shacked up with someone who thinks in terms of Figure 8s and zills practice is. Sometimes, when our relationships go bad, we turn utterly nuclear and wage eight-year "hate campaigns" against our exes and their new partners.

Plus – and I'm just going to go ahead and be bold with the banana here – despite what may be assumed from all those old album covers and the hoochie Bettie Page routines and whatnot, there are many, many belly dancers in the world that you would not want to see naked but are awesome at what they do. (There are also some, like yours truly, who have the double handicap of not being awesome at what they do and are certain never to trouble the pages of Maxim either.) The ugly, the elderly, the very young, the knock-kneed, the overweight, the flat-chested and bony, the dangerously buxom, the scarred and the scared: we're all in class together, trying to think kind, charitable thoughts about the willowy 22 year-old next to us with the perfect skin, flawless makeup and glossy mane who is effortlessly layering camels over her shimmies. The bitch. No, she's not a bitch, she's lovely. Shit.

As bad as it is, that whole "make your man a sultan" shtick is benign compared to that (tiny) portion of the population who see the art form as downright immoral. I thought I had tripped over one of their number when I encountered Dr Toby Hill's new book, Never Hug a Belly Dancer: 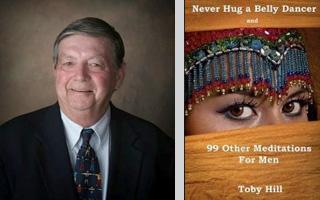 Board member Dr Toby Hill recently published “Never Hug a Belly Dancer and 99 Other Meditations for Men.” A habitual journal writer, he decided to publish his writings in hopes they will be of benefit to others. When asked about the title, Dr. Hill said, “It basically means sometimes what you see and what you desire is not what you really want.”
Amazon.com describes the book as: “Devotionals for men who seek strength, encouragement and direction in life. Toby Hill shares his life-experiences [sic] with every man and how he has dealt with many conflicts, situations and decision-making. It takes a somewhat humorous look at life and gives one man's views of resolution and how to achieve the ultimate.”
Here is an excerpt from the book: “Last evening was Anna Lee’s birthday. Our youngest adult daughter wanted to take her mom to a local Mediterranean restaurant so that we could all watch the belly dancing as we ate. The hidden agenda here was that our granddaughter likes to get out on the dance floor and belly dance with the dancer. The dancer was a nice, young, blonde, attractive lady. She entertained us well as she danced with a sword on her head and with flames in her hand. She gyrated and cavorted with us all and was especially gracious to our little granddaughter as she often let her leave the table and join her in her “belly” dancing. On the way out of the restaurant I gave the young lady a generous tip. As she took the money she turned to give me a hug. I admit, I was kind of looking forward to it. After all, she was young and pretty and blonde and she had few clothes on. Go figure. Well as we hugged each other I learned something else about my new young female friend. She was also sweaty! After all, she had been dancing all night long. The eagerly anticipated hug had not lived up to my expectations. So often being disappointed is the result of our expectations when we base them on worldly standards. It does not make any difference if we are looking forward to a new house, and new car or a new woman. Inevitably they fail to meet our expectations. The expectations of our world when seen through Gods [sic] eyes rarely disappoint. When we reflect on those things that God would have us yearn for – peace, patience, love, healthy relationships and most of all a relationship with him, we are never disappointed when we have obtained what he desires us to have. We should spend some time thinking about how many times in the past that the acquisition of possessions has not lived up to our expectations and what we could have done and should do differently in the future. With all of that said, I still think about the local Belly Dancer [sic] every once in a while. Maybe next time, I’ll tip her earlier in the evening.”

{Drumming fingers on the desk and staring out the window as I wonder where to start.}

'Kay, first off, that central premise is hard to argue with. We've all had the second helping that looked tasty but made us feel sick or whatever. Secondly, it's also not like he's arguing that the belly dancing is something that 'nice' women don't do (in fact, he uses the word 'nice' to describe the dancer in his anecdote) or that believers shouldn't be the audience for it – on the contrary, his granddaughter is allowed to get up and have a go, though part of me wonders if that will be allowed as she gets older – and he even talks about a return visit to the restaurant. So far, so good, Dr Toby. You and I could totally sit down and break bread together, though I would take you to task on that cover. What is that all about, eh? A picture of a candle or a sunrise used to do just fine for cover images on books about spirituality. But not now. Oh, no. Now men need bedroom eyes and old skool Orientalist fantasies with their efforts to become better people. Bah!

We might also have some tense moments when I point out to Dr Toby that he uses the same old tired adjectives that people who don't know what they're looking at use: 'gyrating and cavorting'. Go on, Dr Toby! Chuck in some 'writhing', and if you're feeling wild, why not a generous pinch of 'grinding and wiggling' as well? Why not? You think she was so young and pretty and blonde that you describe her that way not once, but twice! Plainly your vocabulary could do with some stretching. Or you just need editing.
Now, there is a chance that the dancer in question was doing exactly what the good “doctor” described and maybe her performance was less than ladylike. But I'm willing to bet that anyone who can cope with sword and fire dancing in a restaurant while entertaining small girls at the same time has racked up her fair share of hours of study and knows what she's about.

This brings me to the main concern I have with Dr Toby's interpretation of events. Given that this woman has a regular restaurant gig, how likely is it that she is going to hug a strange man just for tipping her? I cannot help but envisage a situation in which she merely stuck out her hand for a friendly, though formal, handshake to say thank you, and instead found herself dragged into 180 pounds' worth of Dr Toby-style bear hug. (A bit like someone sticking their hand into that dough-boy thing from Ghostbusters II.) Since Dr Toby closes his tale with a thinly veiled threat to start stalking her, we can be forgiven for thinking that maybe the sweaty hugger was wearing a tie rather than a sparkly bedlah.

I therefore eagerly await the dancer's version of events, perhaps to be titled Never Trust a Randy Chancer.
Posted by Ramona at 12:00