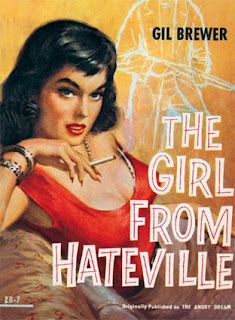 I’m not after any advice, I just want to vent to someone who will understand. I love belly dancing, but am filled with rage by the following things:

• Dancers who won’t give you any space in class.

• Those black singlet tops with ‘Belly dancer’ written across the front in sparkly, curly letters. The trousers with the same print across the butt are worse. Where else are you going to wear them except to class, where everyone already knows you’re a belly dancer? They’re a rip off and it upsets me that other people don’t see this!

• Dancers who don’t bother investing proper time and/or money in a performance outfit. Only strippers dance in actual underwear – fixing an earring between the cups of your red satin T-shirt bra DOES NOT COUNT as decorating it!

• Unfinished costumes (see above). A bit of nice fabric wrapped around your waist is exactly that. It’s not a skirt. While I’m about it, yoga pants are for the gym, not the stage.

• The blurring of the fine line between cheekiness and sleaze. Winking at the audience while doing a hip circle = cheeky. Performing to It’s Raining Men and running your hand suggestively up and down your furled umbrella = sleazy.

• Inappropriate tipping. If a man’s face comes into contact with your cleavage because he’s using his teeth to tuck money into your bra, then ... gross.
• Long tresses that look fabulous but get in the way. There’s no way to make repeatedly flicking your hair out of eyes and tucking it behind your ears into a ‘move’.

• Sports bras under bedlahs. Yep, we can see them. Just get your costume fitted, FFS.

• Those tan coloured foot-thong things. They do the job, but are they supposed to be flesh coloured? And if so, whose flesh? On that point, I’ve never seen a black or brown pair.

• All those pretzel poses you learn in yoga class. Very impressive, but not choreography.

• Teachers who take it really personally when you go and learn from someone else. News flash: Our relationship was based on a commercial transaction. I was paying you, we weren’t romantically involved.

• Students who take it really personally when teachers refuse to recognise them as The Best in Class: you pay to be taught, not have your ego stroked.

• Teachers who don’t teach. OK, you’ve showed me the move. Now tell me whether or not I’m doing it right.

• Dancers who perform in front of audiences but look as though they’re grooving out in their living rooms while doing the vacuuming. It’s nice that you’re enjoying yourself, but what about us? Don’t we count, goddammit?

• Rude audiences. No matter how sucky the dancer is or how little you’re enjoying her performance, you will pay attention now and bitch later.

• Hafla performers who leave immediately after their number’s over and take their friends and family with them, ensuring that the dancer who closes the show is performing to the MC, the videographer and their best friend who doesn’t like belly dance anyway.

God, Jilly, I feel so much better now. Thanks!

P.S - I heard on the grapevine that you have new costumes. Any chance of a picture or two?

So pleased to have been of service to you, m'dear, and in theory I can't say I disagree with any of the points you raise. However, I do hope that you don't spend too much time accentuating the negative. No matter what's getting you down, you should always make room for fun and joy - it could even save your life!

For instance, as you may know, until quite recently I was relentlessly pursued by marine biolgists. Despite being on the lam, I still found time to go and hang out with some old narwhal pals of mine from back in the day. Not only did we have a great time, just chewing the fat and knocking back more rum than was good for us, but it turned out that those unicorn-like horns of theirs are great for puncturing holes in inflatable boats and sending marine biologists to watery Arctic graves - particularly when said marine biologists have been relentlessly pursuing a certain colossal squid and finally catch up with her when she's partying with narwhals. Of course, Sally, the fate of Dr D'Or and his colleagues is apocryphal and strictly between you and me.

I may or may not be able to confirm that marine biologists taste like Chicken of the Sea. (They totally do.) The upshot, my gorgeous guppies, is that your Aunt Jilly is BACK!
You are also quite right about my new finery, Sally. To celebrate the end of my time in hiding, I went shopping at Amphitrite's Costuming and got these utterly adorable outfits that make me look about 1500 dress sizes smaller. If you're ever at the northern end of the Mariana Trench you should stop in and check out her stock. Here I am in my Hawaiian Bobtail Squid costume: 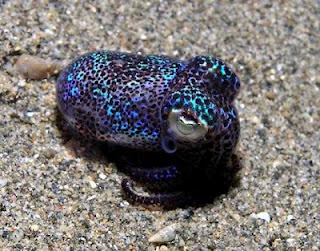 This one is of me in my new favourite, the Striped Pyjama Squid outfit. I think it makes me look like a zebra: 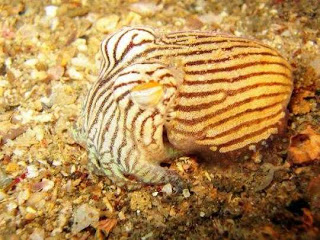 I cannot believe the inches this takes off my width. Amphitrite is a genius - and I am hugely indebted to Princess Farhana and her Facebook page for tipping me off to her unique stylings.


Squid pics from ScienceRay
Posted by Jilly at 13:26