Wonder Woman has always had a special place in my heart. As a wee one playing hopscotch, I would always make a special point of "Wonder Womaning" the turn at the top of the grid by imbuing it with as much drama as possible. Linda Carter's saggy baggy blue knickers were, to me, the very pinnacle of Glamma. A few years, ago, The Man gave me a pristine edition of a Wonder Woman comic for my birthday, which I was going to keep in its plastic shrink wrap until he insisted I open it. Tucked inside the cover was a voucher for a sky dive. Have I ever mentioned I'm afraid of heights?

Anyway, you can imagine the thrill that fluttered up my spine when I found this pic of Toledo-based dancer Calliope in her utterly smashing homemade Wonder Woman costume: 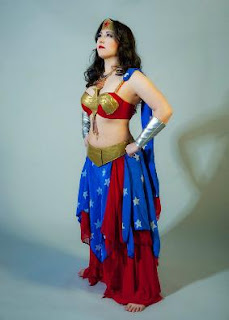 Calliope, who apparently specialises in 'character' belly dance, gets extra Brownie points if she took her name from the first volume of Neil Gaiman's Sandman series rather than from the Greek muse herself.

Unfortunately, however, this outfit is not quite perfect. As we all know from the Wonder Woman theme song, Diana cannot fight for anyone's rights without her satin tights:

Calliope makes up for that oversight with her improv in this number. OF COURSE there has to be spinning!

“Go in peace my daughter. And remember that, in a world of ordinary mortals, you are a Wonder Woman.” Queen Hippolyte
Posted by Ramona at 07:20