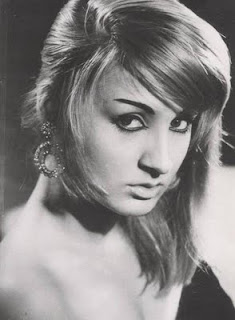 Özcan Tekgül was one of the great stars of Turkish cinema from the 1950s to the 1970s – like a Turkish version of Hind Rostom.

Özcan was killed in a car accident on 2 July 2011. Thanks to a lack of mandatory birth registration in Turkey, her age was estimated at anywhere from 66 to 73 years old. By the time of her death, she had been all but forgotten (apparently her body lay unclaimed for three days) and information about her life and career is pretty much unavailable in English. I did, however, manage to unearth this gem about the most famous controversy of her life from the archives of The Spokesman-Review, and what appears to be the only two clips of her on YouTube. And, as a special bonus because you've been so good, the comedy Flying Saucers over Istanbul. Here they all are – you're welcome!

via the New York Times

ANKARA, Turkey – Hounded by terrorism, inflation and government crisis, Turks have welcomed their latest political controversy – over a belly dancer.

Sener Battal, the parliamentary spokesman for the Islamic fundamentalist National Salvation Party, challenged Prime Minister Suleyman Demirel’s government to explain why a medal and been awarded to Ozcan Tekgul, one of Turkey’s most famous belly dancers.

In his parliamentary challenge, the deputy from Konya asked the prime minister: “Should this queen of disgrace and scandal put the medal given to her by your government onto her belly or do you have any idea as to what proper place she should wear it? Do you plan to put this medal onto the said person yourself?”

The minister of culture, Tevfik Koraltan, hastily denied what he called “trivial” reports that a medal of honor would be given to the dancer. He said the National Turkish Cinema Council decided to give a certificate of honor to artists who had worked in the country’s film industy for more than 25 years.

“Ozcan Tekgul’s name is not included on the list of 66 honorable artists,” Koraltan told the pro-government daily Tercu-man. “No document or plaque has been presented to Miss Tekgul.”

The 38-year-old belly dancer, however, insisted the authorities had notified her that she was on the honors list. The Istanbul movie magazine Ses supported her contention – and the National Salvation Party said it believed her.

“I am ready to go to parliament to show them my art,” Miss Tekgul said in Istanbul. “I won this prize not for my belly-dancing but for my art. The prize was given to me not because of the 150 films I’ve played in but because of my contributions to the Turkish Oriental dance.”

Miss Tekgul started her career at the age of 13 in Istanbul, her hometown, and later belly-danced in Europe and Africa. In Turkey, where she was once taken to court and accused of “dancing obscenely,” she made her reputation in nightclubs.

“She was very good 20 years ago,” a Turkish editor said. Turkish intellectuals generally consider belly-dancing decadent although it is still popular.

There has been a move among Turkish singers to “clean up and modernize” belly-dancing. Ajda Pekkan, Turkey’s representative in the Eurovision song contest this year, sang fully clothed with “modernized” belly-dance movements.

Most Turkish newspapers – from left to right – have reported the affair with gusto. The popular independent dailies Hurriyet and Gunaudin published front-page color photographs of the scantily clad blond dancer, with the caption: “Where should the culture medal be put?”


And from 1954, this clip in which Ozcan appears at the end. The other dancer is Nimet Alp:

And now for tonight's Feature Show: Flying Saucers over Istanbul: