1. The Simon Cowell
Simon Cowells have little-to-no discernable talent of their own, but don't let this stop them from ripping apart other dancers. For some bizarre reason people are willing to accept The Cowell's opinions as fact, further confirming Cowells in their belief that they are the shizz and everyone else* is shit. The most irritating thing about Cowells is that, inevitably, sometimes they have a point (see number 6).

*Apart from the handful of dancers The Cowell considers to be "useful friends" (see number 4).

2. The Beyonce Knowles
She's pretty. She's talented. She's smart. She knows everybody. She wins every competition going and she's been dancing for only two years. You'd hate her guts, except that when you were running late for a performance once she helped you with your hair and makeup. Afterwards she left a note on your Facebook wall gushing about how beautiful you looked and how much she'd enjoyed your set. What a bitch.

A fantastic dancer and initially you can't work out why she's not really famous. She seems so lovely and outgoing! But you make the mistake of sharing a room with The Lohan at a weekend of dance workshops, and by the time she's vomitted in your gig bag and shaken you awake at 3am to tell you that the CIA is after her, you're beginning to get an inkling as to why more festival organisers aren't clamoring for her services.

4. The Diana Ross
Hugely successful and there's no doubting The Ross's credentials. However, every diva/divo battles insecurity. Fail to kiss The Ross ass on a regular basis and you're dead to them. Dead, I tell you! Quite likes sitting next to The Cowell at student shows, sniggering about the lameness of other teachers' choreographies. 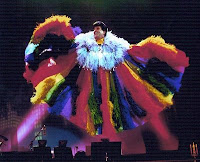 5. The Liberace
Once upon a time it was probably about the dancing, you know? But gradually the spectacle took over and now it's all about the costumes. Somewhere underneath those £6,000 Swarowski crystal-encrusted Isis wings with the built-in wind and smoke machines there's a really good dancer. Somewhere.

6. The Madonna
Puts in a lot of hours to look this ripped and get technique this sharp, and you had better notice it when The Madonna dances. Has no problem with doing moves other dancers would consider more Stringfellows than Samia Gamal, and hence butts heads often with The Cowell and The Ross. Although her no-shit-given-or-taken attitude may be laudable, in The Madonna's hands belly dance becomes a soulless martial art.

7. The Jason Segal
Genuinely believes they are "just a hobbyist dancer", so at tax return time The Segal is shocked to find that they have been earning more money from gigs and teaching than they have been from their day job. Has just the one costume, but is so gosh-darned nice and devoid of ego that it seems rude to hold a hafla without inviting them to perform.
Posted by Ramona at 08:00