The IMDB synopsis is a treat:


Jungle guide David Marchand is kidnapped by a tribe of natives who want to sacrifice him to their white rhino god. Just as he's about to be killed, however, he is thrown backwards in time to a kingdom of brunette women and their blonde slaves. David rejects the advances of Queen Kari and sides with the blondes, which leads to him being imprisoned in the dungeon. Can David find some way of returning to his own time? And if he does, what will be awaiting him when he returns?

Hmm. What will be awaiting David when he returns? A redhead? Or a long life regretting his appearance in a film that was made only to offset One Million Years B.C's £140,000 budget blow-out by recycling its sets and costumes (true!)?

Queen Kari is played by Jamaican-born beauty Martine Beswick (who was also in One Million Years B.C, in which she had a memorable fight scene with Raquel Welch). Basically, I'm just posting this because I dig her look and her taste in home decor:

Beswick had quite the career and was a Bond girl twice, once in From Russia With Love and again in Thunderball. Here she is as Zora, fighting over some bloke with former Miss Israel Aliza Gur (Vida) in Russia's most famous scene: 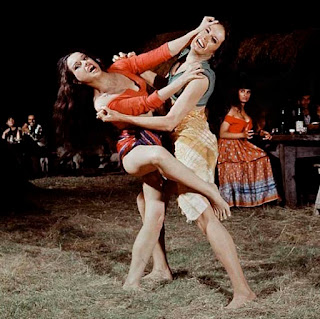 This scene comes right after Lisa Guiraut comes out and does her thing, which I have already posted here.
Posted by Ramona at 08:30