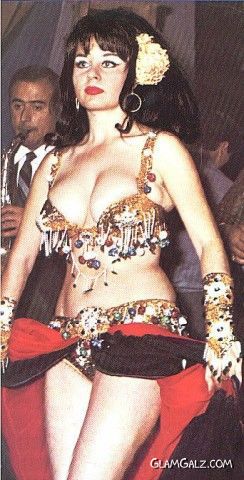 I would be a stone-hearted mama indeed if I didn't share this eye-popping photo set of raqs sharqistas from Glam Galz. Entitled "Beautiful Arabian Belly Dancers", it features a variety of hotties from the recent past, most of whom are about as Arabian as the Swedish Chef. But why quibble over details? Most of the images are black and white and celebrate the va-va-voomness of a number of unnamed dancers and models. I could take an educated guess at who a few of them are, but not with any degree of confidence.


My two favourites happen to be the Colour Queens at left and below. The lady languishing on her soft furnishings has an expression that plainly says "THIS is how you wear a beehive and chiffon, babes" -- those eyebrows brook no arguments.

If I had to choose just one image to take in my wallet to the desert island, no question it's the dame on the left. Back in the day, men were men, women were women and the economy was so awesome that a wodge of pre-chewed gum would buy you a Carribean island.

There was no such thing as "resizing", though, so if your costume arrived and it was six sizes too small that was just too damn bad. You just had to keep on truckin' man, so you took your tiny costume and made it look even smaller by boosting your hair to the heavens and your cleavage to the max. If some bogus cat in the front row dared give you the hairy eyeball, you threatened to unleash the Raqs Beaver on his ass. Remember, kids -- she did it so you don't have to. Can you dig it?
﻿ 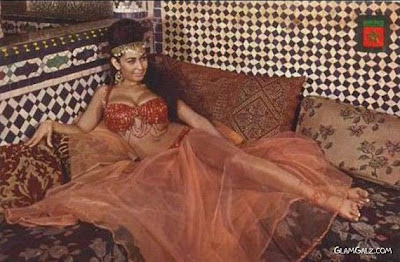