This is the last of the Novembro posts, but obviously not the last time I'll post on a male dancer. In fact, I unearthed so many Hombres of the Hipscarf that this thing could easily have become Decembro, Manuary, Febro-ary and Macho. And then I would have had to stop when a pun-averse reader came by house and smashed my typing fingers with a mallet.

A couple of weeks ago I took my first workshop with Ozgen and it was splendid. I've never really done any Turkish dance before, and thanks to London's notoriously patchy weekend public transport system there were only six of us in attendance so I got to take up as much space with my awkward gyrations as I wished. Score! He's also a super-nice person, so it was worth going just to meet him.

The theme was Turkish waltz, which meant that there was lots of floaty movement required. Tragically, this particular mama don't float, though it was still instructive to watch Ozgen do it. The man is built like a greyhound, a fact that is not so apparent in videos of him. Perhaps I am so used to seeing narrow-hipped whippets onscreen that it doesn't even register with me anymore.

His most recent show, One Night in Istanbul, is sold out. Guess who has to join the waiting list for a ticket?

Apparently, someone in New Zealand has invited him to do some workshops there but he's heard there's "not much of a scene" and that it might not be worth his while. I did my best to convince him otherwise, but if you're in Hobbiton New Zealand and want him to venture your way -- and obviously, you do -- make the best possible use of your internet connection and start lobbying him!
Posted by Ramona at 13:23 3 comments:

All I know about Drakon I learnt from The Pink Gypsy. His real name is Daniel, he lives in Texas and he's a Reiki master.

Here's Drakon with a sword:

Pink Gypsy is too polite to say it, but he also looks a bit like the Mormon Jesus: 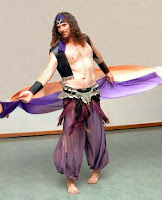 Happy belated birthday (7 November) to the inimitable Mr Tito Seif. Really, he needs no introduction, but just in case he does here's this rather impenetrable Gilded Serpent profile, that at times veers very close to becoming very penetrating indeed:


"As discreetly as possible, I study his body with great fascination. He is very striking and well built, his frame inspires a feeling of abundance, his arms are beautifully toned but, fortunately, not unattractively muscular, and his hands, even when resting idly, combine the strength and resilience of a manual worker with the dexterity of an artist. He is an imposing person but more attractive than anything else is his smile and the way his personality exists in his body; a way that is light, playful, kind, and generous."

Let us now move away as discreetly as possible from the heavy-breathing and sweaty palms of that profile to see, with great fascination, what has inspired such swooning adoration.

Because I am performing my first-ever solo next week (neurgh!), and it's a drum solo to boot, I have decided to indulge my fondness for completely psyching myself out by watching Tito's16-minute epic performance from this year's Nile Group Festival. Yea-ah. That was a mistake...I really didn't need to do that to myself. Check it:

Vjekoslav is not a star, which is sort of the point of this post. At some stage every star has to be a student, and not every male belly dancer goes from their first class to being Horatio Fuentes. Vjekoslav, for instance, is a 20 year-old agricultural technician(!) who has obviously been attending classes regularly and paying attention.

No flashy, overly revealing costume, no overly tricky moves (although the balancing on tea glasses is pretty impressive) -- this is just a guy who really enjoys what he does and does it very well. He seems like a chilled dude, even if half of his audience still look at least faintly unconvinced when he finishes. He also deserves some big ups for his classic choice of music, rather than opting for Western pop (though it must have been tempting when putting together a routine for mainstream TV).

Here he is on Croatia's Super Talent. You don't need to be able to speak Croatian to get the gist of the judges' reaction!

At Oriental Night in Leipzig, 2010. Are head tosses effective if you have short hair? Yes. Yes, they are:

I interrupt Novembro to bring you this thing, which is a clip of the Stage School students in the Arabian Dance Theatre's show Be Here Now. That's me on the extreme right of your screen. We only had a few hours to learn this and then rehearse it, so it may not be the most technically challenging dance in the world, but I think we pulled it off. The choreography is by Tara Lee Oakley (who comes in at the very end) and Shafeek Ibrahim. Now I'm just going to post this puppy before I change my mind...

Dr. Gamal Seif is Egyptian, but now I think he lives in Brazil. Other than that...I'll be honest. I got nothin'. The only reason I'm posting about Gamal and Khaled is because I noticed Gamal's picture on Amir Thaleb's website and, like Alice chasing the White Rabbit, I decided to go down the hole. All I found is a whole lot of YouTube splendour and a private Facebook page.


I'm a bit embarrassed. I feel like I should know more about Gamal Seif and Khaled Seif. Anyone out there like to enlighten me further?

EDIT (14 November 2012): I have just had the benefit of looking at this video -- previously posted as the first clip in the post but moved for reasons that will soon be clear -- on a screen that is significantly larger than my laptop's, and I am STUNNED. Do you guys see what I see? Am I imagining this? Are Khaled and Gamal dancing in *gulp* blackface? WTFUCK?!

Khaled Seif has a YouTube channel, and that's where I found this Nubian dance:

Although I am not fit to tie his signature-range sandals*, I am as amused by Mr Thaleb's stage craft as I am impressed by it. Since I am a massive ham, this is intended as a compliment.

Here he is at Aziza's birthday bash in 2010, back when he didn't have a fear of the barber shop. This is a casual, relaxed performance and makes quite a contrast with the other epic performances highlighted in this post:

And listen to the crowd on the following two videos, man. It sounds like The Beatles are on stage! People shriek like this when I dance too, but their cries have an edge of panic and terror missing from those in these clips. Here he is at La Plata, Buenos Aires, 2011. I am unsure what to make of this costume. Without wishing to, I keep finding my attention drawn to the little Amir Jnr, if-you-know-what-I-mean-and-I'm-sure-you-do:

At the Dariya Mitskevich Gala Show, 2011. Never before has a live band done SUCH a good job of evoking the sensation of muzak. Or is that just me?:

Is it hot in here?

YouTube channel        Brief bio and video clips (including a duet with Sadie!)
Posted by Ramona at 13:16 2 comments:

Guo Wei is one of China's pre-eminent raqs dancers and has more recently gained international attention thanks to his collaboration with the Bellydance Superstars. For those of us who struggle valiantly with the veil, this [heavily edited] performance is enough to make you either (a) start working on your technique for hours on end or (b) throw up with envy. It depends on your disposition, but for the record, I'm hurling chunks:

Can he barrel turn? Yes, he can:

His website is in simplified Han and emits lots of weird noises, but if you're just interested in watching him be amazing, his neglected YouTube channel (not updated since 2010) is worth a look.
Posted by Ramona at 20:28 No comments:

This was inevitable, really -- a Novembro post on my fabulous teacher, Mr Shafeek Ibrahim. Sure, he's a hard task master and pulls no punches (until the day I die, I'll be able to hear him barking "SMILE! You look horrible!"), but at least he makes hard work fun.

Apart from his indisputable chops, you have to grant the man his other monumental talent: looking as comfortable in an over-the-top costume as the rest of us do in our PJs. Dammit!

Did I also mention that Shafeek holds the current men's world record for the most number of tanoura (Sufi) turns in an hour? (His wife, Tara, hold's the women's world record.) Sadly, this is not the tanoura costume he wore in the show this year, which had built-in lighting. Really.

Welcome to Novembro! As announced on Jilly's Facebook page, this month we're featuring male dancers. This first post is slightly poignant, because it features John Compton.

John died at 10 pm on 14 October this year after a long illness. Along with his dance partner, Rita 'Rebaba' Alderucci, John created the Hahbi 'Ru Middle Eastern Dance Ensemble. Both John and Rita had performed with Jamila Salimpour's Bal Anat in the 1970s.

Intensely charismatic, devastatingly handsome and with enough energy to power the national grid, John remained a much sought-after teacher, mentor and performer right up until the end of his too-short life.
Gilded Serpent has a wonderful memorial page if you need any further confirmation of how much he will be missed. There's a host of terrific photos, fond memories and clips -- both interview and performance -- posted there already.

Perhaps because the camera quality isn't too great, this clip isn't featured on GS, but it still shows John at the top of his game. This is from his amazing performance at Tribal Fest 7. Enjoy!