Hey! I'm still here. Recently I enrolled in Anna Kemper's Improver-level class (sure, I heard that, but sometimes you have to accept that no matter how long you've been doing something you'll always be improver level!), so that coupled with Shafeek's classes, preparing my alter ego Ramona for the next Hafla on the Hill -- which is no longer on a hill, natch -- the full-time job and sustaining a happy marriage* = not much time for blogging.


Until I have time to write stuff up properly, I thought I would share this gem from Ann Friedman. It is so apt to what is happening in my head in relation to my dancing that it scares me real bad. FWIW, I am both my own most ardent lover and most fervent hater (especially the bit about being a 'lesser rapper'). Yeah, it gets confusing. 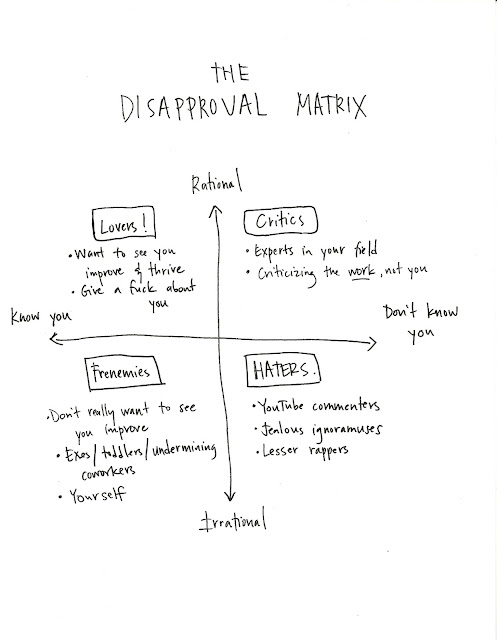 The general rule of thumb? When you receive negative feedback that falls into one of the top two quadrants—from experts or people who care about you who are engaging with and rationally critiquing your work—you should probably take their comments to heart. When you receive negative feedback that falls into the bottom two quadrants, you should just let it roll off your back and just keep doin’ you. If you need to amp yourself up about it, may I suggest this #BYEHATER playlist on Spotify? You’re welcome.

*Get your mind out of the gutter, you filthmeister.
Posted by Ramona at 13:12 No comments:

Welcome back Saroyan Cymbals! Even though you never went away!

Back on 26 January I posted a rather preemptive lament for the closure of the Saroyan Cymbal company in the wake of Harry Saroyan's retirement.

Foodycat was first with the news that I'd jumped the gun a bit, but now I can officially confirm she's right. This comment was left on the post this morning:


Officially on behalf of Mr. Harry Saroyan and Saroyan Cymbals I would like to address the doubts and fears being expressed online regarding the future of Saroyan Zills and their availability for professionals and enthusiast in the music and dance industries. After 45 years as the leader in production, Harry has decided to turn over the reins of Saroyan Mastercrafts, and is currently securing new ownership for Saroyan Cymbals ... In the mean time have no fear, Harry's zills will again be available for purchase online (www.saroyanzils.com) on June 15, 2013 and will continue to be produced to meet the high demand for quality zills for many, many years to come. It is very important to Harry that his strict guidelines for superiority and craftsmanship are maintained, and he gives his personal promise that his fans will be very pleased with his successor. In the intervening time please feel free to contact me at heather@netreva.com with any questions or concerns...Sincerely, Heather Lint, Netreva Inc. c/o Saroyan Mastercrafts.

Netreva Inc appears to be a marketing firm based in California, so this looks legit to me: it would make sense that when the webiverse is writing your company off as dead and gone that you would hire someone to go around it laboriously copying and pasting news of its survival on every blog you can find.

Email ThisBlogThis!Share to TwitterShare to FacebookShare to Pinterest
Labels: props

On Saturday I took a workshop with the phenomenal Razia Star, who always brings something fresh and tasty to the creative table.

Attendees were asked ahead of time to think of two gestures: one that says something positive, and one that says something not-so-positive. My first thought was 'two thumbs up' for my positive gesture because (A) Roger Ebert had just died and (B) I do it all the time in conversation (it started as a dorky joke to punctuate sentences ironically and now I can't stop myself from doing it ALL THE TIME. Mum was right: if the wind changes, you do stay that way).

If a belly dancer suddenly gave the audience two thumbs up that would probably be odd, so I didn't share it with the group. My negative gesture was going to be hiding my face, because I am cripplingly self-conscious, geddit?, but then I opted for hunching my shoulders.

Razia encouraged us all to find a way to use those gestures to our advantage, particularly the negative ones. The idea is that you can modify them into something beautiful and expressive, or use them as reminders to self-correct.

By coincidence, today on Pinterest I spotted a video of a dancer who takes that idea to an extreme: Elena Lantini.


Scott Wilson & Elena Lentini, 1981: A dancer from Minnesota that I talked with at 3rd Coast Tribal recommended checking out Elena Lentini as an example of an belly dancer who has made introversion work for her! She is apparently very protective of her image, so video is not widely available, but I can see what the dancer I met meant. Very entrancing & intense.

I am not sure that even I would spend this much time with my back to the audience, but then again this is heavily edited so perhaps over the course of her set she spent far more time facing them! Either way, she really is fun to watch and her costume is droolilicious. Enjoy! 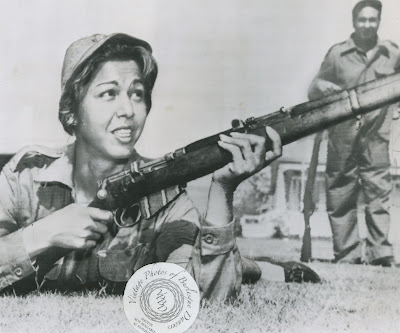 This frankly astonishing photograph of Samia Gamal is not an April Fool's Photoshop job, I assure you.

Taken from the Vintage Photographs of Burlesque Dancers tumblr, it purports to show Samia in training with Egypt's National Liberation Army, for which she volunteered in 1956.

1956, I need hardly tell you, was the year of the Suez Crisis aka the Second Arab-Israeli War. It was also the year that Samia's American husband, Shepherd King III, dumped her for Turkish dancer Nejla Ates, but I'm sure that that couldn't have had anything to do with Samia deciding to learn how to use a rifle.

Please keep your "shooting from the hip" jokes to yourself.
Posted by Ramona at 17:06 6 comments: