Can I get a witness?

A new, illustrated version of the Bible, written in idiomatic English and transposing many of the stories to present-day situations, has just been released. Written by Mark Russell and with artwork by Shannon Wheeler, God is Disappointed in You attempts to get the essence of the Old and New Testaments across to believers and non-believers alike, even though the title is likely to harsh the mellow of any first-time hearers of the Good News.

Certainly, my first impression of it makes me think I'll stick with the King James version. To whit: 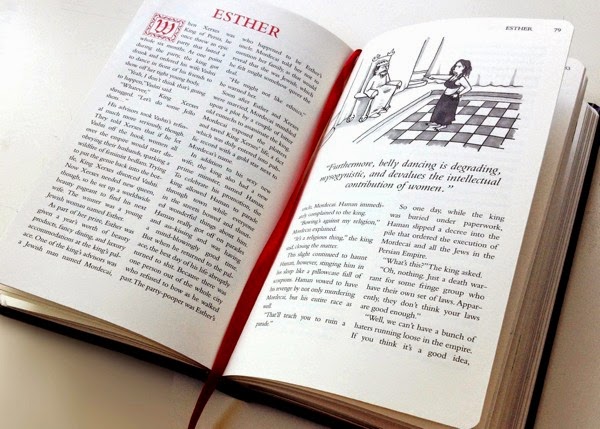 If your eyes can't make that out, the cartoon is of a woman in a belly top and a skirt pointing accusingly at an enthroned king. The caption reads, "Furthermore, belly dancing is degrading, mysogynistic [sic], and devalues the intellectual contribution of women."

This snippet buys into at least three of the key stereotypes about belly dancers* that I encounter in one form or another all the time:
Until my fingers go numb, I could sit here and type a refutation of each of these fallacies in turn, but why bother preaching to the choir?

This cartoon makes me very disappointed in GiDiY. Presumably, it illustrates a vignette from Russell's retelling of how Queen Vashti, wife of the Persian ruler Ahasuerus, refused his command to "display her beauty" before visiting dignitaries at court. Enraged by his wife's disobedience and worried that she might set a precedent for women throughout his empire, Ahasuerus removed Vashti as queen and replaced her with Esther. I am prepared to accept correction on this point, but I can't find a specific reference to "dancing" anywhere in the Book of Esther.

If GiDiY is truly a "modern interpretation" of the Bible, why doesn't the caption read, "Furthermore, snapping nude pics of me without my permission and forwarding them to your friends is degrading, mysogynistic [sic], and devalues the intellectual contribution of women"?

The answer, it seems to me anyway, is that GiDiY does not understand that, while there may be misogynists in a belly dancer's audience who treat her in a degrading way that devalues her intellect, the dancer is not responsible for how her audience reacts to her performance. Let's not get into the whole "Well, I've seen belly dancers who were little more than strippers" thing -- seriously, let's not, we all have lives to get back to -- because I could then show you umpteen YouTube clips of fantastic dancers in modest costumes where the comments beneath are as vile and woman-hating as you could wish.

Although GiDiY is emphatically not a straightlaced approach to the good book, it's this page from the Book of Esther that, to my way of thinking at least, drops a massive hint that the more things have changed, the more they've stayed the same. From the days of Vashti and Esther to our own, it's art and self-expression -- and specifically women's art and self-expression -- that's one of the things on the very long list of what makes "God", or at least the people who purport to speak for God, disappointed in you.

*And, arguably, dancers in general.